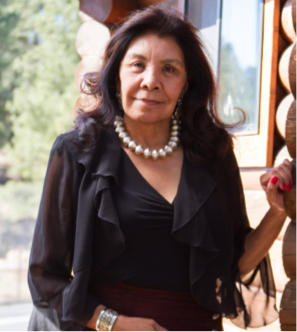 is founding chair and professor of the department of Applied Indigenous Studies at Northern Arizona University (NAU) and teaches courses on Tribal Nation Building. A former tribal leader, Dr. Trujillo is the Principal Investigator (community outreach) on the National Cancer Institute, U54- funded Partnership for Native American Cancer Prevention. The major goal of this project is to alleviate the unequal burden of cancer among Native Americans of the Southwest through research, training and outreach programs that are collaborative with the communities they serve. Dr. Trujillo is also the NAU research, education and training co-director of the Center for American Indian Resilience (CAIR). CAIR NIH R25 is a partnership with University of Arizona, College of Public Health, to explore resiliency to reduce American Indian health disparities.

She has extensive experience in the field of education, health, social services, and cultural enhancement programs in conjunction with the communities themselves, the tribal government entities, and higher education institutions. Together with the National Council for Science and Environment and American Indian Higher Education Consortium she has partnered to develop and augment Tribal Colleges and Universities (TCU) faculty knowledge and skills in climate research, traditional ecological knowledge, and STEM student learning.

Professor Trujillo serves on several boards, including the Environmental Protection Agency (EPA), Governmental Advisory Committee (GAC), Farmworker Justice; and the Global Diversity Foundation. She was appointed by President Obama to serve as a member to the Joint Public Advisory Committee for the governing Council of the Commission on Environmental Cooperation.

This website uses cookies to improve your experience while you navigate through the website. Out of these, the cookies that are categorized as necessary are stored on your browser as they are essential for the working of basic functionalities of the website. We also use third-party cookies that help us analyze and understand how you use this website. These cookies will be stored in your browser only with your consent. You also have the option to opt-out of these cookies. But opting out of some of these cookies may affect your browsing experience.
Necessary Always Enabled
Necessary cookies are absolutely essential for the website to function properly. This category only includes cookies that ensures basic functionalities and security features of the website. These cookies do not store any personal information.
Non-necessary
Any cookies that may not be particularly necessary for the website to function and is used specifically to collect user personal data via analytics, ads, other embedded contents are termed as non-necessary cookies. It is mandatory to procure user consent prior to running these cookies on your website.
SAVE & ACCEPT